What is predicted and expected to be the biggest game of 2019, Call of Duty: Modern Warfare, launches this week on PlayStation 4, Xbox One, and PC. Lots of people are geared up and excited to play Infinity Ward’s soft-reboot of the 2007 game. But when, exactly, does the new shooter launch on each platform? Those details are now coming into focus.

Activision published a blog post that outlines the key particulars. On PC, Modern Warfare will be available around the world at 6 PM PT on Thursday, October 24. That works out to 9PM EDT / 10 PM BRT that day. Players in London can start playing on PC at 2 AM BST on October 25, which works out to 3 AM CEST in Stockholm, 4 AM in Moscow, and 12 PM in Sydney.

Check out the map below to find out when Modern Warfare launches for you, but bear in mind again that this map is for PC only. 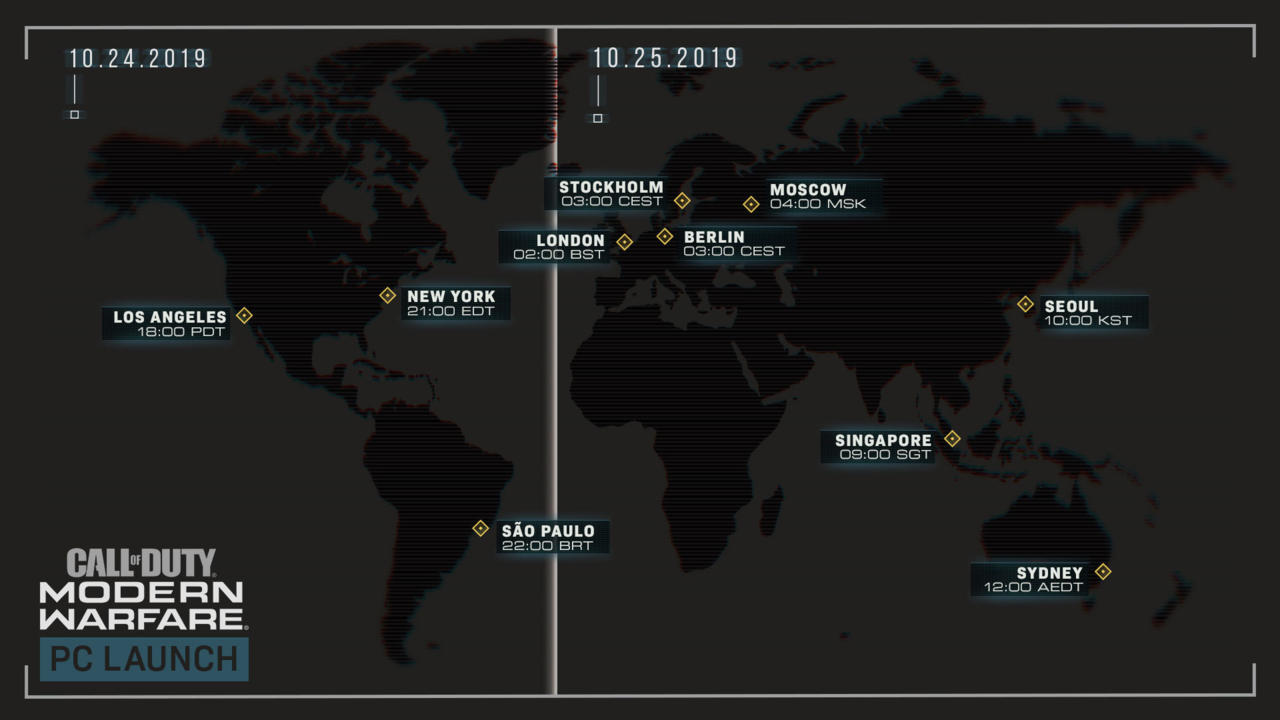 For digital copies on PS4 and Xbox One, Activision said people should “consult your console dashboard for accurate launch times in your region.” On Xbox One, the Modern Warfare store page states that the game will release at 12 AM on October 25 in Australia.

CharlieIntel reports that Modern Warfare will release for PS4 and Xbox One at midnight local time on October 25 in all regions around the world except for North America. In North America, the game will reportedly go live at 6 PM Pacific, 7 PM Mountain, 8 PM Central, and 9 PM Eastern on Thursday, October 24.

Pre-loading for Modern Warfare is available now on PS4 and Xbox One, with support for PC pre-loading coming on October 22.

Ahead of Modern Warfare’s launch, Activision recently shared details on the game’s post-release content. As the publisher previously confirmed, Modern Warfare will not have loot boxes; instead, the game will use seasonal battle passes much like Fortnite.

The pass will offer a free content stream and a premium one; the former will let you unlock anything that has an impact on gameplay, like weapons, while the latter will feature vanity items like unique cosmetics.