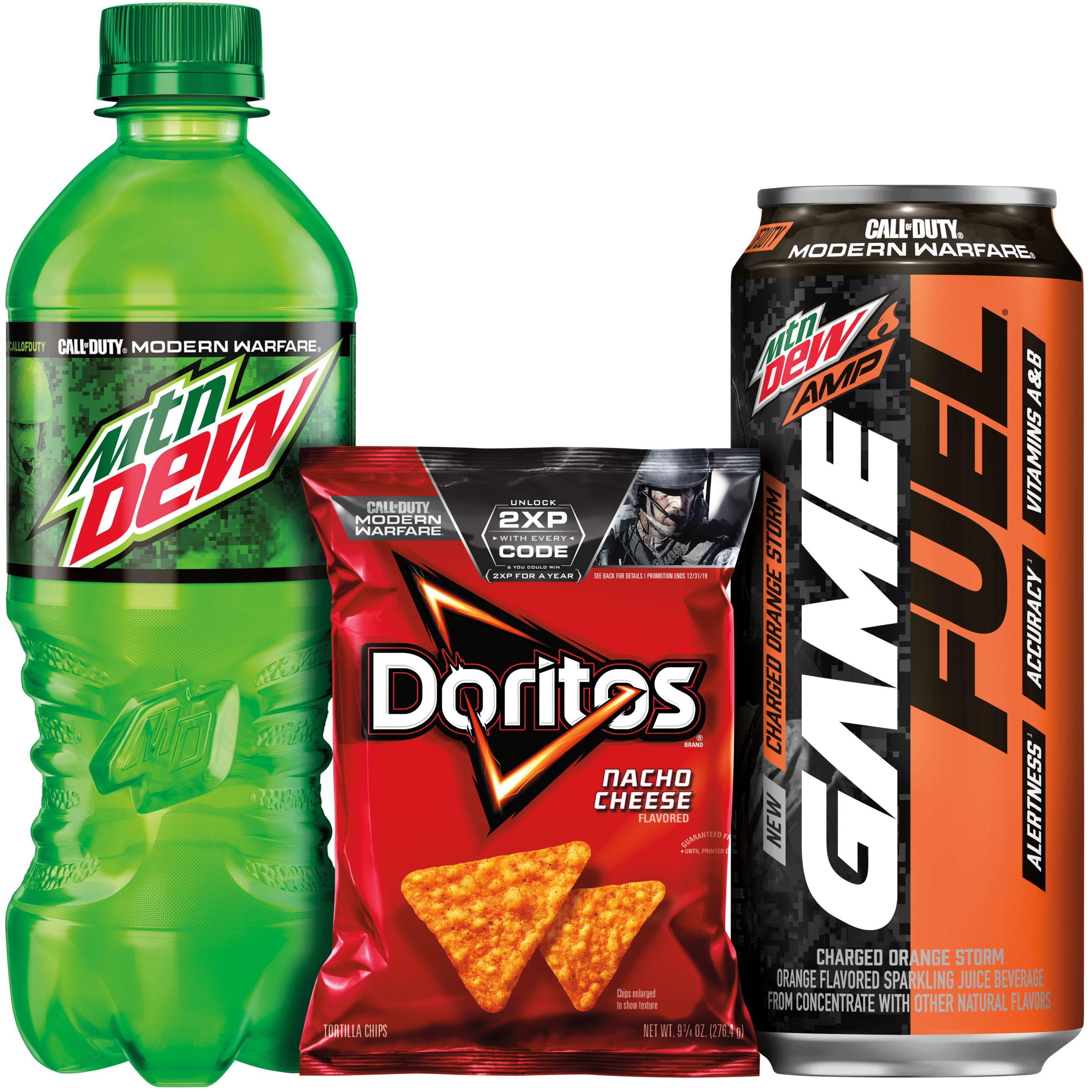 Activision, Mountain Dew, and Doritos have announced a partnership to celebrate the launch of Call of Duty: Modern Warfare.

The partnership kicks off this weekend with the Pro Am tournament for the game with the beta.

Then in October, Mountain Dew bottles, Game Fuel cans, and Doritos packs will have 2XP codes for Modern Warfare.

Bravo six, going dark. MTN DEW, MTN DEW AMP GAME FUEL and DORITOS today are joining forces with Activision’s celebrated Call of Dutyfranchise, in time for the highly anticipated release of Call of Duty®: Modern Warfare®. As part of the groundbreaking program, players will be able to unlock in-game rewards inside Modern Warfare with the purchase of any participating MTN DEW AMP GAME FUEL, MTN DEW or DORITOS products, simply by entering unique codes found on the packaging. The excitement kicks off on Sept. 14 with a livestreamed, competitive event – the MTN DEW AMP GAME FUEL Celebrity PRO-AM. This special pre-release exhibition pairs gaming professionals with celebrities in an adrenaline-inducing experience that highlights the new 2v2 game mode in Call of Duty: Modern Warfare.

“We’re thrilled to join forces with Activision just ahead of the hugely anticipated Call of Duty: Modern Warfare release,” said Erin Chin, Senior Director, Marketing, Mountain Dew and MTN DEW AMP GAME FUEL. “We put a stake in the ground when we launched Game Fuel last year, and we’re excited to continue delivering one-of-a-kind experiences, like this month’s PRO-AM with Modern Warfare – sure to be one of the most exciting games of the year.”

“This dynamic collaboration is a best-in-class example of the power of PepsiCo’s food and beverage portfolio coming to life for consumers on one of the world’s largest stages,” said Leslie Vesper, Senior Director, Marketing, Doritos. “Doritos and DEW are known for providing players with unique ways to access exclusive gaming experiences, and now we’re taking this to a new level by working closely with Activision for Modern Warfare.”

Published by Activision and developed by Infinity Ward, Call of Duty: Modern Warfare is scheduled for global release Oct. 25. The game delivers an epic re-imagining of one of the most iconic and thrilling video game properties in history, Modern Warfare.

On Sept. 14, MTN DEW AMP GAME FUEL will bring together some of the top names in music, sports and entertainment for the first-ever Call of Duty: Modern WarfarePRO-AM tournament. Taking place at the Thunder Esports Center in Long Beach, CA – the PRO-AM will pair well-known gamers such as Shroud, H3CZ and Aydan with NBA athletes like D’Angelo Russell (Golden State Warriors) and Karl-Anthony Towns(Minnesota Timberwolves), as well as actress Ajiona Alexus (Light as a Feather, 13 Reasons Why, Empire).  Players will be able to try out a series of traditional 6v6 multiplayer matches, as well as the game’s intense new Gunfight 2v2 mode, more than a month before the epic title’s Oct. 25release. Gunfight 2v2 mode is an epic evolution of Call of Duty’s famed overall multiplayer that players can quickly jump in and out of, streamlining battles for a thrillingly intense gameplay experience. The winning team will receive a prize of $25,000 to donate toward their choice of a participating charity; the secondary charity will also receive a $10,000 donation:

To ensure fans don’t miss a second of the heart-pumping showdown, the event will be livestreamed across Twitch, Facebook and Twitter on Sept. 14 at 12pm PT. DEW Nation can tune in to cheer on their favorites and watch the teams face off on the (digital) battlefield by visiting https://www.twitch.tv/callofduty.

MTN DEW AMP GAME FUEL is committed to providing players with more options than ever before to #LVLUPTHEGAME. In addition to its four existing offerings, the brand is also introducing a new, limited-time edition flavor – Charged Orange Storm. The portfolio contains ingredients shown to improve accuracy and alertness, coupled with next-gen hardware, like a no-slip grip that mirrors the sensory design of gaming accessories.

Stay tuned for the latest news on this partnership.